What helped a bit

Last week, I went with my friend Stephanie to the Y for a "demonstration" of their Chicago Swing Dance class (which turned into a brief lesson).  Though traffic is not awesome on the way to her house, and the music the dance is done to (R&B) is not my favorite, it was fun enough that I signed up (and, more importantly, paid) for six weeks of classes.  Yesterday was the first real class--and boy, was it hard to leave the house at 6pm on Monday.  The combination of having paid $60 and having told Stephanie I'd go with her is what got me out the door, rather than still on the couch reading reading reading.*

I'm very glad I went.  While I'm still not thrilled with the music, class was fun--we went over the basic step again (which I had mis-remembered--it's actually 1,2-and-3, 4-and-5, 6) and learned several varieties of turns.  And, I got to hang out with Stephanie and her toddler, which was fun.  And importantly, when I came home and tried to read again,** my brain was so much clearer.  It was the walking meditation experience again.

So today, though it's my day off, I'm going to campus to sit in on a class that's reading Mayra Montero's The Messenger, which I wrote an article about.  I'm happy that I got out of bed before 11 today (because on a day off, that doesn't happen as much as I'd like it to), so that I have time to do an exercise video.  If I can continue to condition myself to understand that exercise/activity makes be feel better and think more clearly, I think it will hopefully overtime become more integrated into my routine.

I was going to write "and then hopefully despondent days like yesterday will be rarer," but I don't know that I want that to be true. Rather, I think my being honest about when things aren't great is ultimately good for me (and something I'm not great at being frank about).  So, for now, days like yesterday are just fine.

*The reading for this class I'm auditing is really something.  I had to pull out a binder for all of the readings, because a folder wouldn't contain it all.  The readings for Thursday are about an inch thick, an inch of history and theorizing southern and queer studies.  I'm glad this is all I'm taking!

**Thank goodness, I've only got one article left to read.  It's a lot!
Posted by Bellatricksy at 9:26 AM No comments:

Now that the shininess is wearing off

A few years ago (2006, I believe), I went to a weekend retreat on "dancing the goddess free" in Asheville (I mean, come on, it was in Asheville).  It was such a wonderful experience--one of the outcomes of the weekend, in fact, was my determination and decision to finish my BA in earnest (and here I am six years later with not only a BA but an MA and coursework completed toward my doctorate. Quite the weekend, indeed).  However, the Monday after the retreat was AWFUL--I was so sad.  I missed being excited about jumping out of bed to go to sunrise yoga by the pond.  I felt resentful toward my asinine coworkers.  I didn't care one iota about transcribing meeting notes.

I think something like that may be going on in my teaching right now.  After teaching two sections of Introduction to Women's and Gender Studies last semester (70 students total!), returning to teaching composition feels like a let down.  I've taught this class once before, and haven't made any major changes (partly because I think this sequence of assignments makes sense, and partly because we were given about a week's notice to turn in our syllabuses for this semester during finals week last semester).  Sure, had I wanted to make a major change, I could have, but I think that, for a class whose focus is argument and research, this assignment sequence--a rhetorical analysis of a print ad, group skits on argument fallacies, followed by a research project which includes an annotated bibliography, a researched expository paper, and a researched position paper--accomplishes the major goals of the class.

I wish I could resurrect the themed 102 class I did at UT, which had research its focus, and was focused on the South.  It included field research and archival research, along with academic research.  However, the way that schedules keep shaking out, I keep missing the window of opportunity to submit my themed course proposal.  That's one solution for my boredom.

I also fully admit that teaching a WGS course last semester has contributed to this feeling of let-down I have this semester.  WGS was so fun--the students were such a self-selected group, and were so excited about what we were doing, and the course material was so interesting and relevant.  My intention is to have even composition course material be interesting and relevant, but it's starting to feel stale.  And, this class is made up primarily of two groups of friends, so I'm having to wait out the chit-chat more than usual.  This detracts from my motivation.

I was reading Donne Quesada's Buddha in the Classroom last night, which addressed just this feeling of burn out and boredom.  Her suggestions included trying to stay in the moment and connect with students individually, which I tried today.  I also started the day by sitting zazen for ten minutes, though that led to my not having time to sit down and eat my cereal this morning.  I took it in a baggie without milk, instead.

Now that I think about it, I am intending on trying some new things in the classroom, like incorporating some of Sondra Perl's Felt Sense exercises.  It's just that this is the first time I've been in the classroom and not been totally excited about being there.  I'd so much rather be doing my own work--I've got a couple of articles I'm really excited about right now, and the course I'm auditing (on the Queer South!)  is overlapping nicely with both my reading lists and my interests.  I finally sat down last week and closely read all of Foucault's History of Sexuality, Volume 1, and was so jazzed about it.  I'd like the jazz to bleed over into my classroom, right now.

I suppose I'm being incredibly demanding right now.  I'm used to having less than stellar classes as a student; this is the first time I've felt that way about a class I'm teaching.  And it's only week two.  Ah, learning experiences.
Posted by Bellatricksy at 1:28 PM 2 comments:

The Month of Letters 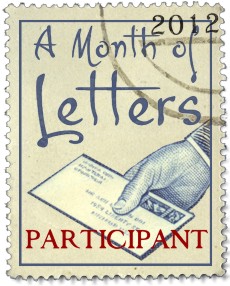 As I have continued to make active, non-school activities a priority, I have noticed a positive effect on myself--my thinking is clearer, my body feels better, and I'm less cranky.  A few days ago, I put down the queer theory I was reading, went upstairs, and cut out a skirt.  I then came back downstairs and picked my book back up--and my brain felt remarkably clearer!  It reminded me of the time I did the sitting/walking/sitting meditation practice at a Zen temple--45 minutes of sitting, 10 minutes of walking, followed by another 45 minutes of sitting.  After the walking break, when I returned to the cushion, it was as though clear water had been poured through my head--I *felt* (for lack of a better verb) so much clearer.  A bit into the second part of the sitting, I actually had an experience which, afterward, I could only describe as, "Wow, that must be that "emptiness" thing that everyone talks about!"

In that spirit, I've decided to commit to Mary Robinette Kowal's Month of Letters Challenge.  It may just be a notecard, but I think that sending something out every day is a good challenge to set myself.  I already write letters occasionally (I love pretty stationery and notecards)--this will be a good way to spread some happiness around.  It's such a rare surprise when something pleasing shows up in the mail that I'm not expecting.  I used to be such a letter-writer.  All through high school and college, I kept up correspondences with friends from camp and from places I used to live.  Though email is handy and immediate, I love the permanence of letters.  I have boxes in my closet of not only my correspondence, but that of Aunt Julie and Mamaw, too. I even have the telegram Aunt Julie received, announcing that I'd been born (and named after her).  Such tangible artifacts are important.

It will make me happy to send so many small bits of joy in the mail.  And I'm interested to see how committing each day to thinking of someone else--getting outside of my own head for a bit--effects me.

Let me know if you want me to send you something!
Posted by Bellatricksy at 4:00 PM 2 comments:

I read this article today about blogging at the same time that I have a tab open on my computer to write for a feminist blog.  I still maintain that blogging keeps me productive, as I'm thinking about my work in a lower-stakes environment than more formal places.  Plus, I get a lot from my online interactions--even (especially?) those with people I've never actually met on Twitter or facebook, I've been able to ask for ideas and compare experiences in teaching and grad school.  I've exchanged lesson plans and worksheets.  I've solicited ideas for texts to teach.  My University of Venus blog post got me a guest lecture spot in my department--a poorly attended one, but a good experience and a cv line nonetheless.

That my talk at school was so poorly attended (four people!) may highlight one aspect of online interaction I enjoy--there's an audience!  There's interaction!  As one of my disappointments with my current institution is the lack of face-to-face interaction, having people respond to hashtagged Twitter posts during First Year Comp Chats is nice.  And on facebook, I've been able to "introduce" friends in different places to each other and interact with them all at the same time.

My other blog is dedicated to my reading list, and I find it a rewarding way to track my progress.  Look at how many posts I made in December!  Maybe I'll get through these lists!  One day!

And I'm sure it's all ultimately vanity-driven, too, but it's good to have an outlet for my words words words.
Posted by Bellatricksy at 3:03 PM No comments: