The Edith Wharton Society invites papers that engage with this year's SAMLA conference theme: "Cultures, Contexts, Images, and Texts: Making Meaning in Print, Digital, and Networked Worlds."  We are open to a variety of interpretations. For example, what meanings emerge when we consider Wharton's work alongside the "networked worlds" of her various homes and travels?  How has the rise of digital humanities and new forms of communication fostered new scholarship and approaches to Wharton's writing?  A range of responses to this topic is welcome, including examinations of her travel writings, other non-fiction, fiction, and poetry.  By May 17, 2013, please send a 300-500 word abstract and one page CV to Monica Miller, Louisiana State University, at mmil132@lsu.edu.
Posted by Bellatricksy at 7:00 PM No comments:

I have a hazy idea of what I want to say here--there's something which is irking me, but I can't quite articulate it.  And I feel like I've sort of been part of the problem myself.  So bear with me.

As the professionalization chair of the English grad student organization this year, I'm trying to organize some professionalization workshops for grad students this semester.  Publishing is one of our students' biggest concerns, and I'm going to ask a faculty member if he would do a repeat of a well-received workshop he did a few years ago, about what makes a journal article appear "grad student-y."  I'm not sure exactly what he covers in it, but I heard good things about it.

I've also asked the DGS to do a workshop on professional communication and networking.  There are two big things I'd like her to cover.  One, I'd like her to talk about things like, how to strike up a conversation at a conference/other networky place with a total stranger.  Or how to talk to a scholar you admire without sounding like a total fangirl.*  The other thing is more basic things, like that many faculty members take offense if you call them by their first name, or many of the other habits--especially in email--that I've heard faculty members complain about.

However, something's been irking me about a thread that's running through these requests, and I realize that it has something to do with the idea that we need to learn to not sound like graduate students.  It occurs to me that when most academics use the phrase "like a graduate student," they generally don't mean it as a compliment.**  And perhaps that doesn't bug most people, but there's something that smacks of other observations like, "You throw like a girl!"  When I first heard that one, my first response was, well, yeah, I am a girl.  Oh, you mean that as an insult?

And I suppose what I'm feeling right now is something like, well, yeah, I am a graduate student.  And I'm kind of getting tired of that label being used as a negative.  When I was trying to articulate this to my husband, he observed that that's kind of the problem with a hierarchical system such as academia, that those lower down on the learning curve do make mistakes and bumble things which those more experienced generally make less often.  And to be frank, I am aware enough of my own place on the learning curve/food chain, and my own ignorance of the often complicated, not-quite-visible politics going on--as well as the countless examples I've seen of other graduate students stumbling in their attempts to seem professional or assertive--that I understand why the term so often used as an adjective to mean unprofessional or ignorant of the big picture.

So, should I just suck it up and stop taking things so personally?  Or is there a conversation to be had about the derogatory and pejorative uses of the phrase "grad student"?

*Seriously, I worry sometimes about turning into Chris Farley: "You that time when you wrote Dirt and Desire?  You know, and you asked, like, what would happen if we replaced William Faulkner with Eudora Welty at the center of the southern canon?  That was awesome!"

**At a conference recently, I was stopped by a total stranger who congratulated me on giving a good conference paper presentation, and when they discovered I was a grad student, continued their compliments with, "Wow, you don't present like a grad student at all!"
Posted by Bellatricksy at 12:54 PM No comments:

One week down, and a lovely week it's been.  It certainly helps that general exams are behind me, I'm not enrolled in any courses, and I'm teaching Introduction to Women's and Gender Studies, a class which I loved the first time I taught it.  This semester--at least the first week--promises to be just as enjoyable.

This semester I've had the course certified as Communication-Intensive, with verbal and written modules.  I didn't really have to change much from the first time I taught it--I already comment on student drafts, and they do plenty of writing in class, and they have group presentations.  To fulfill the requirements, I've added individual presentations, and a "drafting" process to the group presentations, which will require students to film their presentations ahead of time, and submit them to me for feedback before their final presentation.  This is the first time I've had students record themselves--it'll be good for them (as well as me!) to become more comfortable with such technology.  I'm looking forward to seeing how feedback affects final presentations.  It certainly has an effect on written communication.

And class so far!  Though the roster continues to be in flux (there are three people who have yet to show, though we've had three class meetings, and I've got at least one still on the waitlist), both Wednesday and today I've had some great participation.  Discussions are so interesting in WGS courses--and though I feel a bit guilty saying so (because I really am committed to the importance of teaching composition (so much so that I try to incorporate a lot of it into my other courses)), it was such a breath of fresh air to be in this class last week, after so many comp courses.  A big part of it must be the self-selection of the students--even though many of them take it because they need the humanities credit, there are other courses they could have chosen.  And unlike the previous sections I've taught, this semester I have quite a few young men (before, I had two per class, tops), and they've been contributing to class discussion quite a bit.

We started this week with a short unit on privilege, as a way of emphasizing the idea of intersectional analysis that I try to emphasize throughout the class.  We start by reading Peggy McIntosh's class Unpacking the Invisible Knapsack and John Scalzi's Things I Don't Have to Think About Today.  I really love using Scalzi's work in the classroom--I've used his Being Poor before, too, quite successfully.  I really like both of them, as they really emphasize the invisibility of privilege, and how--contrary to what the word "privilege" makes it sound like--it refers to unearned privileges.  On Wednesday, I started class with some basic vocabulary, including words like "ideology" and "institutions."  After some discussion about the Scalzi piece, I asked what this idea of privilege had to do with the vocab I'd given them earlier--and I got some really astute answers!  Yay, students!

Today, class started with the first individual presentation, which was on the McIntosh piece.  Again, pride in students.  Good presentation, good student responses, interesting ideas.  It occurred to me that that is so often what's missing in my comp classes: interesting ideas.  I think there must be ways to make the subject of conversation in composition more interesting, but I just haven't found that many yet.  It occurred to me today that I could probably kick off comp classes with this unit, with a focus on privilege, and how different modes of writing are related to reinforcement of privilege.

So, next week: historical background!  When I first was planning this class, it was so had not to just make the whole class about first wave feminism.  There are so many fascinating women to learn about!  I'm surprised that there hasn't been a film about Victoria Woodhull alone--she's fascinating.

And now, a three day weekend for a reward.
Posted by Bellatricksy at 11:06 PM No comments:

After three weeks traveling (and one week in bed spent coughing, sneezing, and recovering from said travel), today I felt well enough to venture out into the world and keep my hair appointment. (Sure, sitting in a chair for two hours isn't that challenging, but three days ago, my coughing and sneezing wouldn't have allowed it.)

And, I'm feeling well enough to reflect upon leg of my travels: my first MLA conference.  It came at the end of pretty much three weeks of holiday travel: one week at my mother's in northern Georgia; home for Christmas eve; back on the road Christmas afternoon (because it's cheaper to fly out Christmas than to wait a day) to Cincinnati and Dayton to see my brother and his family and my friends and the many children who call me Aunt Monica; then on the road (literally) from Cincinnati to Boston with a dear friend (even dearer as he did the driving), stopping the night in Erie, Pennsylvania, to the MLA conference.

By that point, I was sniffly.  The combination of kid germs and cold weather is debilitating.  I wouldn't trade any of it, however--getting to sled with my nephews was totally worth it.  And though the temperature was 15 (Fahrenheit!) when we got to Boston, I admit to really savoring all of the cold weather I experienced on this trip.  Probably because 76 degrees on Christmas Day (what I left) does not feel right to me--I like wearing coats and jackets!

Not that there was much reason to go outside at MLA--the conference hotel was attached to a mall, which attached to many of the other hotels.  I really only went outside once, on a much-too-long walk to get Indian food (not my favorite), which my friend Katie and I cut short by deciding to ditch the rest of the group for a lovely-looking French restaurant which appeared as the others were swearing it was just a few more blocks.  It was a brilliant decision--we splurged on a lovely three-course meal with pate' and wine and fabulous dessert.  And conversation which didn't involve either of us having to explain our projects.

Actually, one of the highlights of MLA for me was getting to see so many people I like in one place.  It's one of many reasons I'm glad I chose to go to MLA before being on the market: I got to actually enjoy the conference--attend panels, even!--without the stress (or disappointment) of being on the market.  I did have legitimate reasons for being there--the Women's Caucus for the Modern Languages had their business meeting and cash bar, and I had the opportunity to take part on a search committee for my university (that experience in itself was invaluable!).  In general, though, I'm glad I got a chance to see it first-hand--while I don't have any true MLA horror stories--thank goodness--I did see one audience member interrupt a panel to tell them that they needed to keep it snappy, because they were running short on time, and I certainly saw more "this is less a question than it is three comments"-type Q&A remarks than at many other conferences.

And, I rescued a lost black beret which I found on the floor. 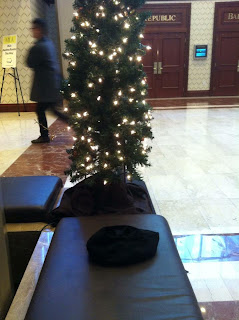 Posted by Bellatricksy at 3:13 PM No comments: